Abby Johnson Spreads Falsehoods About Abortion At The RNC

Johnson, who spent the day under fire for past statements on racial profiling and women’s right to vote, worked at Planned Parenthood for eight years before defecting to the anti-abortion movement.

On Tuesday, she described how she experienced a moral crisis while watching the ultrasound-guided abortion of a 13-week-old fetus.

“Nothing prepared me for what I saw on the screen — an unborn baby fighting back, desperate to move away from the suction,” she said on Tuesday night. “And I’ll never forget what the doctor said next — ‘Beam me up, Scotty.’”

Details of Johnson’s oft-repeated conversion story, which was expanded into a book and then made into a 2019 movie, “Unplanned,” have been contested. Johnson maintains she is telling the truth.

As HuffPost previously covered, Johnson’s description of the fetus’ movements do not align with medical science.

Throughout her speech, she used graphic language to describe abortion, a safe and common procedure. “I know what abortion smells like,” Johnson said. “Did you know abortion even has a smell?”

Johnson also accused Planned Parenthood of racism, claiming that its founder, Margaret Sanger, wanted to eradicate minorities, and asserted erroneously that almost 80% of abortion clinics are located in minority communities. According to the Guttmacher Institute, about 6 in 10 abortion providers are located in neighborhoods where more than half of residents are white. 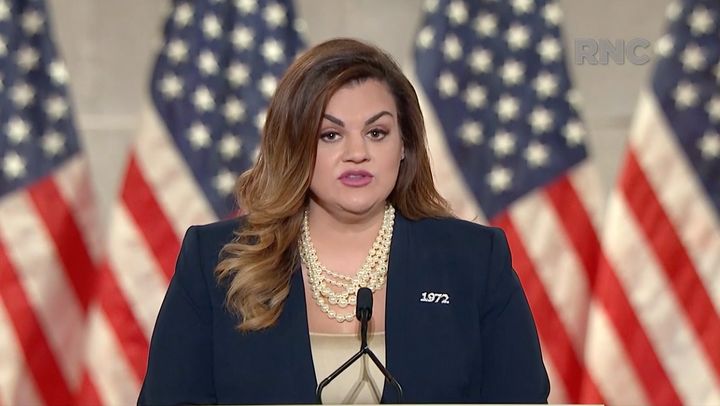 Since her conversion more than a decade ago, Johnson has become somewhat of a poster child for the anti-abortion movement, reminiscent of Norma McCorvey, the plaintiff in the landmark case Roe v. Wade, who made headlines in 1995 when she announced she no longer supported abortion. (Recent reporting on McCorvey’s conversion suggests she was motivated by finances, not her own personal beliefs).

Johnson opposes abortion in all cases, as well as hormonal birth control. On her website, she espouses “a new kind of feminism,” arguing that abortion hurts women, and she advocates for women to dress modestly.

Johnson, who has eight children, has also come under criticism for a viral video clip in which she defended racial profiling. In the video, she says that her adopted brown son was “statistically more likely to commit a violent offense” than her white sons and that it was “smart” for police to be more careful around him.

In the past, she has also co-opted the language of the Black Lives Matter movement to advocate for the end of abortion.

“I think maybe it’s time for me to lead a campaign to paint ‘Unborn Lives Matter’ outside of every abortion clinic in the country,” she tweeted in July. “I’m not much for getting arrested, but I’m feeling like maybe this would show the blatant hypocrisy running rampant in our society today.”

In a statement, Jenny Lawson, executive director of Planned Parenthood Votes, said that Johnson cannot be trusted to tell the truth about safe, legal abortions.