But Trump has been terrible for Native American people and tribes for years ―  a fact you’d never know based on Tuesday night’s spin.

“Our people have never been invited into the American Dream. For years, we’ve fought congressional battles with past congressmen and senators that were part of a broken system that ignored us,” said Lizer. “That is, until President Trump took office.”

He praised Trump for delivering “the largest financial funding package ever” to the nation’s tribes. “The $8 billion in CARES Act funding to Indian County was a great start in alleviating the devastating effects that the COVID-19 pandemic has inflicted on our Indian tribes,” he said. 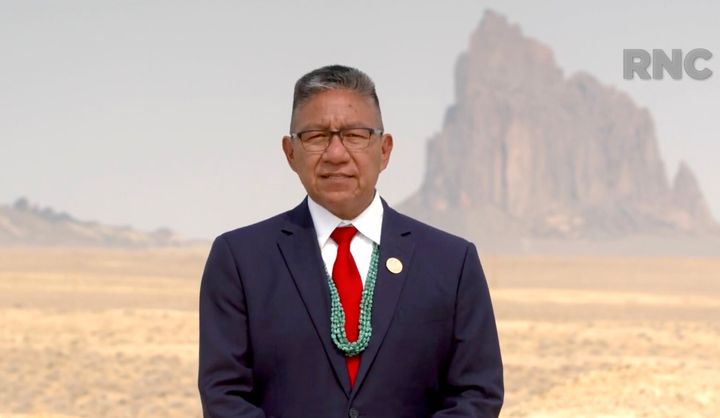 Lizer was referring to the $2 trillion COVID-19 bill passed into law in March. It’s true that it included a historic $8 billion for tribes. But that’s only because Senate Democrats fought to include it. The White House wanted to give tribes $0. And once the bill became law, the Trump administration failed to distribute that money for weeks ― leaving tribes with no federal help as Native American communities were ravaged by the coronavirus.

It took a federal judge intervening in June to force the Trump administration to give tribes hundreds of millions of dollars in COVID relief they were still due.

And that’s just Trump’s record on COVID and tribes.

Over the past few years, the president has routinely used Pocahontas’ name as a racial slur. He tried to rescind the reservation status of a tribe that he’d previously attacked for trying to build a casino on its land. He gutted national monuments in Utah considered sacred to tribes. He made light of the Battle of the Little Bighorn and the Wounded Knee Massacre, a horrifying chapter of U.S. history in which U.S. Army troops killed hundreds of Native people, many of them women and children.

In a particularly shameful display, in 2017, he repeated his Pocahontas slur at a White House event honoring Native American war heroes, where he stood in front of a portrait of Andrew Jackson, the former U.S. president and slave owner who signed the Indian Removal Act that led to the Trail of Tears.

This month, the Trump administration unexpectedly announced it would end the 2020 census count early, which will disproportionately hurt tribes that are already historically undercounted. The effect will be less federal money for tribal communities and weakened representation in Congress ― for the next decade. As one Native American rights advocate put it, “Think of being powerless and poor. That’s what this does.”

None of this came up in Lizer’s remarks. He praised Trump for signing a proclamation recognizing Missing and Murdered American Indians and Alaska Natives, for providing $273 million to improve public safety in Native communities, and for having “strengthened the Supreme Court” by nominating Neil Gorsuch.

It’s true that Gorsuch has been a strong ally to tribes. But that’s not why Trump nominated him to the Supreme Court. He was chosen for the president by the Federalist Society, a conservative legal group that has served as a pipeline for Trump’s lifetime nominees to the Supreme Court and appeals courts.

Lizer’s plug for Trump will certainly upset some Navajo Nation members. The tribe’s president, Jonathan Nez, is a Democrat who has accused Trump of ignoring Native Americans during the coronavirus pandemic. Nez spoke at the Democratic National Convention last week and endorsed Joe Biden.

It’s particularly surprising that Lizer praised Trump’s handling of the pandemic given how hard Navajo Nation was hit ― and how the Trump administration’s delays in getting federal aid to the tribe contributed to its devastation. Navajo Nation had more confirmed COVID-19 cases per capita than any state, and its tax base was wiped out as casinos remained closed. The situation became so dire that Doctors Without Borders, which is typically deployed to disaster zones in developing countries, sent in a team.

Lizer, however, remains committed to Trump.

“I’m excited to endorse President Trump’s reelection,” he said. “And Mr. President, we look forward to hosting you very soon to come visit our land we call Dine’tah.”

If Trump does visit the Navajo Nation, he may want to make sure he gets Lizer’s name right. His campaign misspelled it in Tuesday night’s press materials.