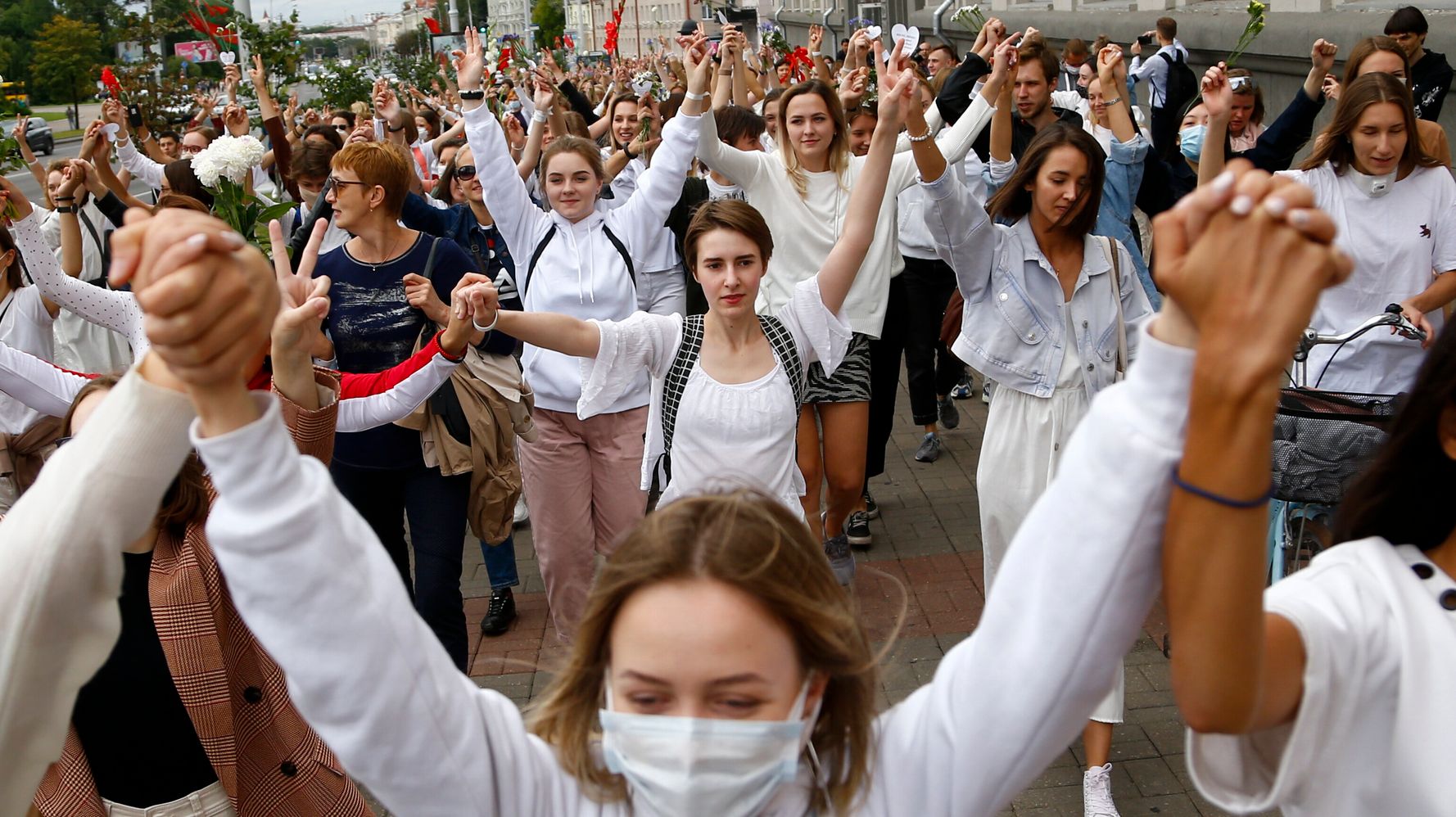 MINSK, Belarus (AP) — Hundreds of people were back on the streets of Belarus’ capital on Thursday morning, protesting for a fifth straight day against an election they say was rigged to extend the rule of the country’s authoritarian leader and against a crackdown on rallies that followed the vote.

In several areas of Minsk, large groups of people formed long “lines of solidarity.” More than 100 women carrying flowers and portraits of their loved ones detained during protests gathered in the southwestern part of the city, where police had shot rubber bullets at people chanting and clapping on balconies the night before.

“Belarusians have seen the villainous face of this government. I argued with my husband and voted for Lukashenko. And this is what I got in the end — I can’t find my relatives in prisons,” said Valentina Chailytko, 49, whose husband and son were detained during protests on Sunday. Chailytko still can’t find any information about their whereabouts.

Thousands of people have rallied all across Belarus since Sunday, demanding a recount of the ballot that gave President Alexander Lukashenko a landslide victory with 80% of the vote, and his top opposition challenger only 10%. Police moved aggressively to break up the protests with batons, stun grenades, tear gas and rubber bullets. One protester died Monday in Minsk, and scores were injured.

Radio Liberty in Belarus reported that one more man died in a hospital in the city of Gomel, southeastern Belarus, after being detained by police.

The crackdown on protesters drew harsh criticism in the West.

European Union foreign policy chief Josep Borrell said that the 27-nation bloc would review its relations with Belarus and consider “measures against those responsible for the observed violence, unjustified arrests and falsification of election results.”

U.S. Secretary of State Mike Pompeo said the election in Belarus wasn’t “free and fair” and urged the government to refrain from violence against peaceful protesters.

Lukashenko derided the political opposition as “sheep” manipulated by foreign masters and vowed to continue taking a tough position on protests. “The core of these so-called protesters are people with a criminal past and (those who are) currently unemployed,” Belta quoted Lukashenko as saying at a meeting with security officials on Wednesday.

Some 6,000 people have been detained this week, according to the Interior Ministry. Belarus’ Investigative Committee launched a criminal probe into mass rioting — a charge that implies lengthy prison terms.

This year the economic damage caused by the coronavirus and the president’s swaggering response to the pandemic, which he airily dismissed as “psychosis,” has fueled broad anger, helping swell the opposition ranks and prompting the Belarusian leader to unleash a renewed crackdown on dissent.

Protesters on Thursday said they were undeterred by the crackdown. “We’re not afraid, there’s no fear,” Alla Pronich, 38, told The Associated Press.

“To audacious rigging (of the election), to violence, to flash-bang grenades the authorities use we respond with solidarity and a peaceful protest. It is all we have,” Pronich said.

Daria Litvinova in Moscow contributed to this report.